Everybody please welcome the newest CAST Engineering artist to the family! Mr Shane Steward - Shane grew up in Griffin, Ga. listening to everything from The Eagles to Vince Gill to Prince. After picking up the guitar at 12 years old, he decided to learn the styles of all of the music he was raised on including bands like Radiohead and Pearl Jam that he was into at the time. It has definitely shown as he has been a hired gun for over a decade. He has gigged with Christian, co

Lucas Chamberlain of Michael Ray added to the artist family!

Welcome Mr Lucas Chamberlain to the CAST Engineering artist family! Lucas is a well versed guitar player, writer, and producer that resides in Nashville. Graduating from Berklee College in the spring of 2010, Lucas has been an in demand player for studio and live work. Read what Lucas has to say about the Pulse Drive - "The Pulse Drive from CAST Engineering is the first pedal I've seen of its kind. The fact that it can provide me with beautiful tremolo AND a perfect solo/amp 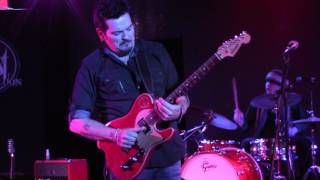 Mike Zito using the soon to be released Peace Drive from CAST Engineering...

Just thought we'd share this video from Mike Zito performing a few nights ago while using the peace drive prototype. We are super excited to release this drive/boost pedal. This one is pretty special and we can't wait to share more about it! for more info on Mike Zito - www.mikezito.com #castengineeringartist #mikezito #peacedrive #geartalk #guitarpedals #knowyourtone #bues #rocknroll

Jon Gasque added to the CAST Engineering Family of artists!

Please welcome Mr Jon Gasque to the family of CAST Engineering artists! Please make sure to take a second and read a bit more about Jon - "Jon Gasque started his love for music at the age of 11 with the Tenor Saxophone. He started playing guitar one year later and realized that jazz and r&b was his "pocket". From Charlie Parker to Eric Johnson, Jon became engulfed in strange sounding chords and melodies and sought after knowing how they work from the inside and out. This led

Prince Azariyah began playing guitar at the age of 6 and discovered a natural attraction to his dads record collection, which developed his ear by listening to artists such as Stevie Wonder, Charlie Parker, Wes Montgomery, Eric Clapton, Chicago, and many others. By the ago of 9, Azariyah was performing with a local church, and there he met a great musician who began to mentor him in the study of music. After school, Azariyah began to travel and perform with singers and musici

We are proud to welcome Mr Hunter Callahan to the CAST Engineering family! Please take a minute and check his music out ! www.huntercallahanmusic.com If you asked the 22 year-old singer-songwriter what kind of genre he plays, he'd reply with the simple response, “I just play music.” And, quite frankly, that’s the truth. At the age of 14, Hunter Callahan first picked up the guitar because he wanted to sound like Guns N’ Roses and AC/DC. “I wanted to be Slash. Probably just abo

We are proud to welcome Kirk Green to the CAST Engineering family. Please take a time and read a little about Kirk and his musical background. Kirk Green is an award winning bassist, composer and film maker. He has produced and starred in commercials for radio and television, scored music for an award winning documentary, and was recently nominated for a grammy for a double platinum single for the artist Ricky Martin. His musical journeys have taken him all over the world as

We are proud to announce that Mike Zito, multi-Blues Music Award-winning singer, guitarist, songwriter and producer, is now a CAST Engineering Artist! Welcome to the family Mike! Please take a moment and check out - www.mikezito.com - and learn more about Mike and his current projects and tour! Also make sure to follow him on all social media outlets - Facebook, Instagram, Twitter, YouTube. #castengineeringpedals #castengineeringartist #guitarpedals #PremierGuitar #guitarplay

Sean Michelson of Alchemy added to the CAST Family!

We are proud to announce that Sean Michelson, of the band Alchemy, is now a CAST Engineering artist! We are glad to have you on board Sean and excited to see what's to come. Please stay up to date with his band Alchemy by visiting - www.alchemyrock.us or follow them on social media - Facebook, Instagram, YouTube. #castengineeringpedals #castengineeringartist #alchemyband #atlantamusic #PremierGuitar #guitarplayermagazine #guitarpedals #seanmichelson #lifetimeguarantee