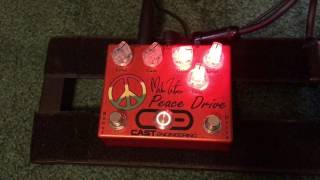 Have you heard our Peace Drive? We've partnered with Mike Zito to tune it to his ears and WHOA! This dual overdrive offers seperate drive and boost pedals. You can combine them and even switch the order of them with our unique order switching. #castengineering #artist #mikezito #blues #guitarplayer #peacedrive #dualoverdrive #boost #uniqueswitching

Let's give a big welcome to Mr Tinsley Ellis to the CAST Engineering artist family! - Here's a brief history about Tinsley and his incredible career - Over the past 40 years, Tinsley Ellis has performed in all 50 states, across Canada, Europe, South America and Australia. He's taken the stage in Russia, the Canary Islands and other destinations not on the traditional touring circuit. His vision for the future is to continue to release the type of albums that push the boundari

Johnny Hiland added to the CAST Engineering family of artists!

Everyone please give a round of applause for our newest member of the family.....Johnny Hiland! Johnny has been playing with the pedals recently and has fallen in love with them. Stay tuned for some words from Johnny on the Texas Flood, Casper, and Pulse Drive. Take a moment and learn more about Johnny and his amazing guitar skills! - www.johnnyhiland.net Facebook - www.facebook.com/johnny.hiland Twitter - www.twitter.com/johnnyhiland #castengineering #artist #johnnyhiland #t

Everybody please welcome the newest CAST Engineering artist to the family! Mr Shane Steward - Shane grew up in Griffin, Ga. listening to everything from The Eagles to Vince Gill to Prince. After picking up the guitar at 12 years old, he decided to learn the styles of all of the music he was raised on including bands like Radiohead and Pearl Jam that he was into at the time. It has definitely shown as he has been a hired gun for over a decade. He has gigged with Christian, co

Congratulations to artist Mike Zito for maintaining the top 5 spot on the Billboard for Blues Albums and not only that, he's also been nominated for for two BLUES MUSIC AWARDS in the "Contemporary Blues Male Artist" and "Rock Blues Album of the Year" categories. Make sure to go and vote for Mike Zito at www.blues.org - #CASTEngineering #artist #mikezito #blues #billboard #makebluesnotwar #guitar #guitarplayer

Please welcome Samantha Fish to the family of artists at CAST Engineering! We are thrilled to have Samantha on board with us. She is an incredibly talented guitar player and singer. Make sure to read more about her below and check out her webpage to get know more about Samantha - www.samanthafish.com Samantha Fish Spins You Around With An Emotional Wild Heart Fish appeared on Devon Allman's 2013 album Turquoise in a duet covering the Tom Petty and the Heartbreakers & Stevie N

Please welcome Mr Christone "Kingfish" Ingram to the family! We are so excited to have Kingfish on board with CAST Engineering. Many of you already know about this incredibly talented and young guitarist but if you don't, please take a moment and read more about him and make sure to visit his website and follow him on social media. www.christonekingfishingram.com Facebook Instagram Twitter Christone “Kingfish” Ingram was born to Princess Pride Ingram and Christopher Ingram in

Prince Azariyah began playing guitar at the age of 6 and discovered a natural attraction to his dads record collection, which developed his ear by listening to artists such as Stevie Wonder, Charlie Parker, Wes Montgomery, Eric Clapton, Chicago, and many others. By the ago of 9, Azariyah was performing with a local church, and there he met a great musician who began to mentor him in the study of music. After school, Azariyah began to travel and perform with singers and musici

We are proud to welcome Mr Hunter Callahan to the CAST Engineering family! Please take a minute and check his music out ! www.huntercallahanmusic.com If you asked the 22 year-old singer-songwriter what kind of genre he plays, he'd reply with the simple response, “I just play music.” And, quite frankly, that’s the truth. At the age of 14, Hunter Callahan first picked up the guitar because he wanted to sound like Guns N’ Roses and AC/DC. “I wanted to be Slash. Probably just abo
1
2